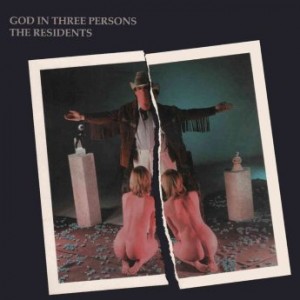 …Produced with The Cryptic Corporation using archival tapes supplied by the group themselves, this package explores and expands the classic 1988 album, which saw The Residents work for the first time in an extended narrative form, enabled by the advent of the CD in the mid-late 1980s. God in Three Persons explores the obsessive, toxic but ultimately loving relationship between the narrator, Mr. X, and a pair of conjoined twins – this set includes previously unheard demos, live recordings, and an extended 23 minute piece previously unknown to fans and long forgotten by…

Employing the same stress-scheme as Poe’s “The Raven” throughout its 62 minutes, “God in Three Persons” is an extended work in “talking-blues” style for narrator, electronic instruments, and a chorus providing comments not to be found in the libretto — they sing production credits at the beginning, and lines like “something’s coming, but not real soon,” and “this is a sad part, oh, such a sad part”. This surreal and yet directly delivered work is as lovingly human as it is comic with profound experience simply expressed…in short, an original masterpiece of American music, directly in the tradition of the Thomson-Stein and Robert Ashley operas. As in all Residents pieces, the voices are modified electronically and the musical elements are deceptively minimal–most of its 14 episodes have only two chords which, however, still manage to instantly produce the correct atmosphere (Phil Glass-like Wagnerian thirds for mythic import, tonic-dominant in triplets for 50’s teenage love story, etc.). There are only passing riffs, more like comments, and the only melody in the whole piece is a wheezy organ quote of the standard doxology hymn “Holy, Holy, Holy (God in Three Persons).”The subject matter is, in part, the derivation of religious and other symbolic images from the naturally erotic… but that’s only part of it. Please give this one a listen. — AMG