Protesters ignored the mobilization of the Wisconsin National Guard and an emergency curfew on Monday night to again protest the police shooting of Jacob Blake.

The Kenosha County Courthouse was the site of more protests Monday, as a large crowd gathered in the evening and members of law enforcement barricaded the area, according to local reports. Some Interstate 94 exit ramps in Kenosha County were closed, too.

Officers used tear gas to disperse protesters in front of the courthouse and protesters threw water bottles at officers in riot gear after the county’s 8 p.m. curfew went into effect, according to reports from the scene.

By late Monday, a truck had been lit on fire, recreating a scene from Sunday’s protests that saw city trucks on fire. The danger appeared to build deeper into the night: Several structures, including a Wisconsin Department of Corrections building, were set on fire in Kenosha. A local furniture store was also completely engulfed in flames.

There were protests elsewhere on Monday, too.

The Kenosha County Courthouse and Administration Building was closed Monday “due to damage sustained during last night’s civil unrest,” the county said on social media.. After video of Blake’s shooting spread across social media on Sunday night, protests in the area led to property damage – at least three city vehicles burned, and words were spray-painted onto the courthouse.

“Kenosha County recently declared racism to be a public health crisis, and our leaders – myself included – have resolved to address this issue in a meaningful way. Sunday’s tragedy and the ensuing reaction reinforce the need for change in our community,” County Executive Jim Kreuser said in a statement.

The National Guard was deployed to Kenosha County “to help protect critical infrastructure and assist in maintaining public safety and the ability of individuals to peacefully protest” the Guard’s public affairs office said in a statement Monday. State Gov. Tony Evers called the deployment a “limited mobilization.”

“I know folks across our state will be making their voices heard in Kenosha and in communities across Wisconsin,” Evers said in a statement. “Every person should be able to express their anger and frustration by exercising their First Amendment rights and report on these calls to action without any fear of being unsafe.”

ACLU of Wisconsin Executive Director Chris Ott called the move unnecessary and urged law enforcement in the area to avoid arrests and displays of force. In particular, Ott warned against the use of tear gas.

“Based on what we’ve witnessed in protests across the country, we know that militarized policing often only serves to exacerbate tensions and opens the door to more police misconduct and violence,” Ott said in a statement.

He added, “The response to protests over police brutality cannot be even more brutality; entering a community armed with tear gas, rubber bullets and riot gear achieves just the opposite effect.”

Blake, a Black man, was shot in the back multiple times Sunday by Kenosha Police Department officers responding to a domestic violence call, according to Ben Crump, the attorney representing Blake’s family. Police have released little information about what led to the shooting and haven’t said why officers approached Blake.

Graphic video circulating on social media shows Blake walking toward a car, followed by an officer who has a weapon drawn.

Blake opens the car door and reaches into the vehicle, and an officer tugs on his shirt. At least seven gunshots can be heard, followed by a car horn. Two officers can be seen in the video near the car; it is unclear what happened before the video was recorded. Crump said Blake’s three sons were in the car when Blake was shot.

Crump said Blake was helping to deescalate a domestic situation. Monday, Crump told the Milwaukee Journal Sentinel, part of the USA TODAY Network, that Blake was in stable condition. 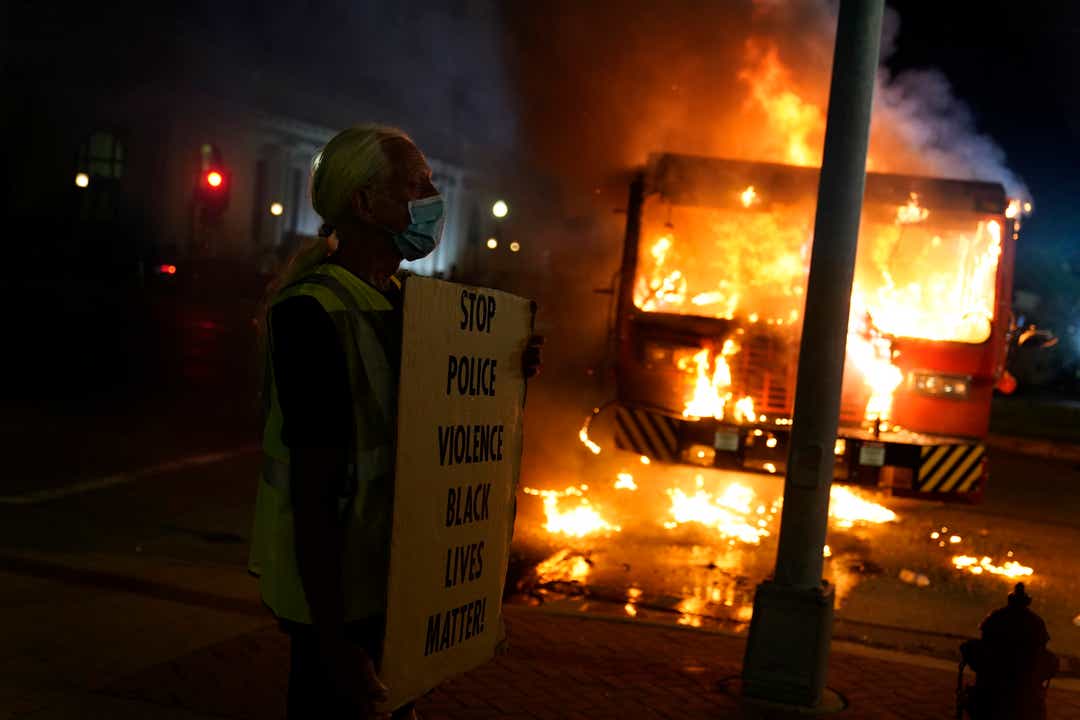 Blake had an open warrant stemming from a domestic case in May, but police officials have not said if the officers were aware of the warrant when they responded to the call Sunday. Online records indicate a warrant was issued in the case in early July.

“At this point, we’re still waiting for the facts to be confirmed,” Crump told the Journal Sentinel. “But we know what we saw in that video, and it was clearly an excessive use of force that was shocking and outrageous and devastating and nobody’s more devastated than his three sons.”

A GoFundMe page has been started for Blake.

Blake’s grandfather, Jacob Blake Sr., was a prominent minister and civil rights leader in the Chicago area who helped organize a march and spoke in support of a comprehensive housing law in Evanston, Illinois, days after the 1968 slaying of the Rev. Martin Luther King Jr.

Rachel Noerdlinger, publicist for the National Action Network, told The Associated Press that the Rev. Al Sharpton spoke Monday to Blake’s father, who called the civil rights leader for his support. Blake’s father will speak at Sharpton’s March on Washington commemoration on Friday, Noerdlinger said.